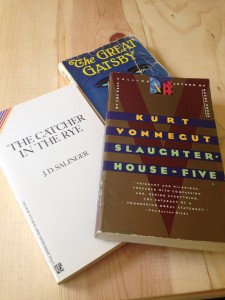 Books are a part of the learning experience, whether you like it or not. The high school years are prime time for reading some of the most mind-bending and life-changing literature you will ever read. With that in mind, we found this list from Modern Library of the top 100 novels. If you are looking for some good reads over vacation, try out one of the classics. We will hit the highlights below:

Number 4 on the Reader’s Choice list is The Lord of the Rings by J.R.R Tolkien, and no, we’re not talking about the Hollywood films. The Lord of the Rings follow the hobbit Frodo as he goes on a quest to destroy the one ring that can give ultimate power to the big, bad Lord Sauron who wants to rule the world. The environment of the three books is intricately detailed and heavily tied to ancient mythology and folk tales. It’s a great introduction to the fantasy genre and great writing.

Many of the greats have been turned into movies, but don’t let that deter you from reading the real thing.  Number 2 on the Board’s list is one of my all time favorites, The Great Gatsby by F. Scott Fitzgerald. It is set in the era of the Roaring Twenties and follows Jay Gatsby as he throws extravagant parties in an effort to impress his love interest, Daisy Buchanan.  Unfortunately, it did not become popular until the mid-1940’s even though it was published in 1925.  Fitzgerald died in 1940 without getting the opportunity to see just how influential his novel would become.

Number 51 on the Reader’s Choice list is The Hitchhiker’s Guide to the Galaxy by Douglas Adams. The madcap mayhem in this book follows an earthling who discovers that the Earth is being destroyed to make way for an intergalactic highway. It’s some of the funniest writing to be found in literature of any sort, and begins a classic series that covers everything from the importance of dolphins to the meaning of life and everything in between.

On the Road by Jack Kerouac is number 55 on the Board’s list. This introduction to the beat generation and its crazy excess showed the world the forerunner to the hippie generation that would yield our predominant baby-boomer culture. The main characters in the book cross America in search of an authentic life and find connection with the great expanse that is America and the people in it. It’s the perfect novel for the soul-searching adolescent.

Catch-22 is the quintessential war novel in that it covers the utter chaos and irrationality that is war. This novel makes both lists at number 7 on the Board’s list and number 12 on the Reader’s Choice list.  The main character, John Yossarian, is convinced that everybody is trying to kill him. His compatriots aren’t so sure, but Yossarian points out that, every time he goes up in an airplane, people are trying to shoot him down. It’s set during World War II, so you can bet he is right, and the sanity of his actions is contrasted with the insanity of the world around him as it gets caught up in destruction. It’s a novel that toes the line between hilarious and tragic.

Another novel that makes both lists is Catcher in the Rye by J.D. Salinger. He only published a few books in his lifetime, but J.D. Salinger has got to be one of the most influential writers in western culture. His character Holden from Catcher in the Rye perfectly embodies the jaded and disheartened state of mind that many of us have experienced in our lifetime. Holden is obsessed with the phoniness of the world and finds it impossible to engage in the fraud with everybody else.

Number 13 on the Board’s list and number 6 on the Reader’s Choice list is 1984 by George Orwell. If you haven’t read it already, get thee to a book store and buy it. This dystopian vision of a future ruled by the omnipresent “Big Brother” is a sneak preview of what could happen in the real world if technology and authoritarianism go too far. At the very least, it’s an interesting thought experiment on the nature of control and the government.

Those are just a few of the great books on the top 100 list. We recommend you check them all out and begin the process of reading these classic, informative and enlightening works. Reading can be your window into a whole new world. Crack open a book cover and find out for yourself.