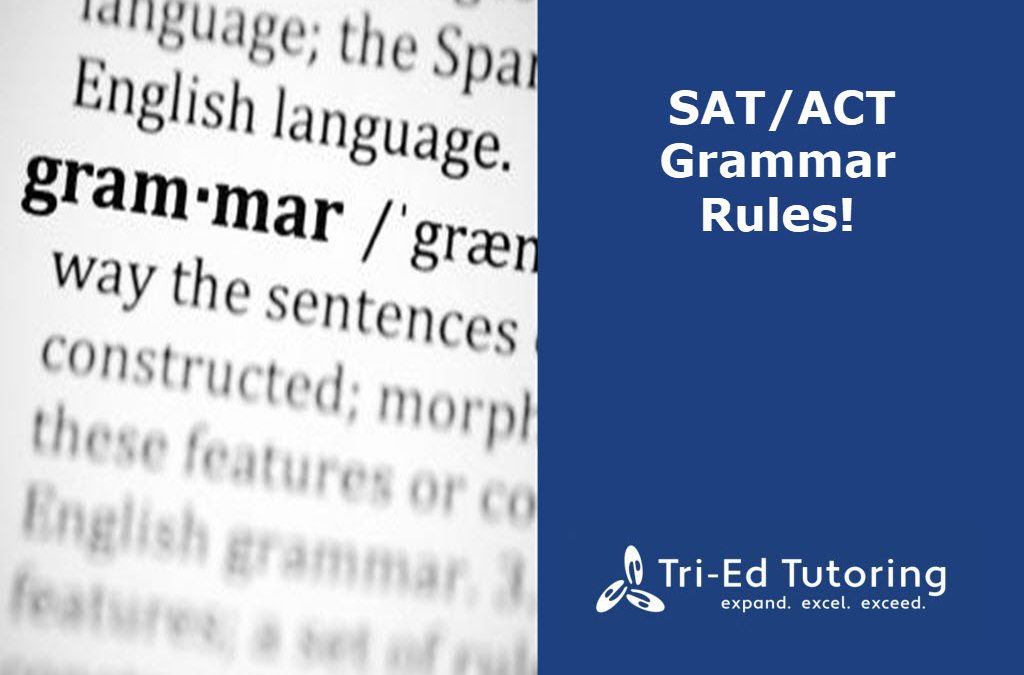 The writing section of the SAT or English section of the ACT both require a strong understanding of grammar and usage rules. On the SAT, the Standard English Conventions questions test students on grammar to include verbs, punctuation (comma, colon, apostrophe, etc.), idioms, and parallel structure. On the ACT, this category is called Conventions of Standard English. If you’ve forgotten your grammar rules, read on for a quick lesson.

A verb describes an action or state. The subject of a sentence explains what the sentence is about or who/what is performing the action. On the SAT, you will be tested on verb tense and subject verb agreement. A verb tense refers to the time of an event: past, present, or future. To determine verb tense, look for clues within the sentence and the sentences before and after to see what other tenses are used.

Example: Students intending to study philosophy in graduate school have scored higher than students in all but more four other majors.
The answer is have scored, not had scored or will score.

Example: The girl in the white dress with blue eyes is nice. The subject is “girl;” the verb is “is.”

A comma indicates a pause between parts of a sentence. Look for the following comma uses:

1. Commas separate items in a list.
Example: My favorite breakfast is bacon, eggs, and fried potatoes.
2. Commas separate independent clauses when a conjunction is used. Ask yourself, “can this be a sentence on its own?” If so, it is an independent clause. The seven conjunctions can be remembered with the acronym FANBOYS (for, and, nor, but, or, yet, so).
Example: I have been to France, but I have not been to Spain.
3. Commas are used to separate a dependent clause. Ask yourself, “can this be a sentence on its own?” If not, it is a dependent clause.
Example: While listening to the radio, we heard that it was predicted to snow.
4. Commas are used before and after an appositive. An appositive further describes the noun before it, and it can be removed from the sentence without losing meaning
Example: My sister, Jamie, is one of my favorite people.
Example: Isaac Newton, one of the most well-known scientists, is credited as the father of calculus.

A colon separates two independent clauses when the clauses relate to each other. Look for the following colon uses:

1. Colons introduce appositives when they are at the end of a complete sentence. In these instances, the colon provides more emphasis than a
comma.
Example.: I finally found my true passion in life: traveling the world.
Traveling the world” is describing “my true passion”.
2. Colons introduce a list of items, but only when the list follows an independent clause (a phrase that could be a sentence on its own).
Example: I enjoy all types of music: rock, hip hop, country, classical, etc.

Idioms are common in speech. There are no grammar rules when it comes to idioms; for these questions you just go with what sounds right. When a preposition (on, in, with, to, of, etc.) is underlined, the correct response is most likely an idiom.

Example: I listen TO the radio, but I listen FOR the mailman.

Items in a list must be the same part of speech (all nouns, verbs, adjectives, etc.).

When you see a pronoun, ask yourself two questions:

1. What is the pronoun replacing? Does the pronoun agree?
Example: The city provides their citizens with free Wi-Fi.
Incorrect: “their” is referring to the city, which is singular.
Correct: The city provides its citizens with free Wi-Fi.
2. Is the pronoun ambiguous?
Example: Eric, Sam, and Jake were running when he fell.
Incorrect: Who is he? We don’t know; it could be Eric, Sam, or Jake. Therefore, we cannot use a pronoun.
Correct: Eric, Sam, and Jake were running when Jake fell.