It’s Time to Apply for College… is it Smart to Apply Early? 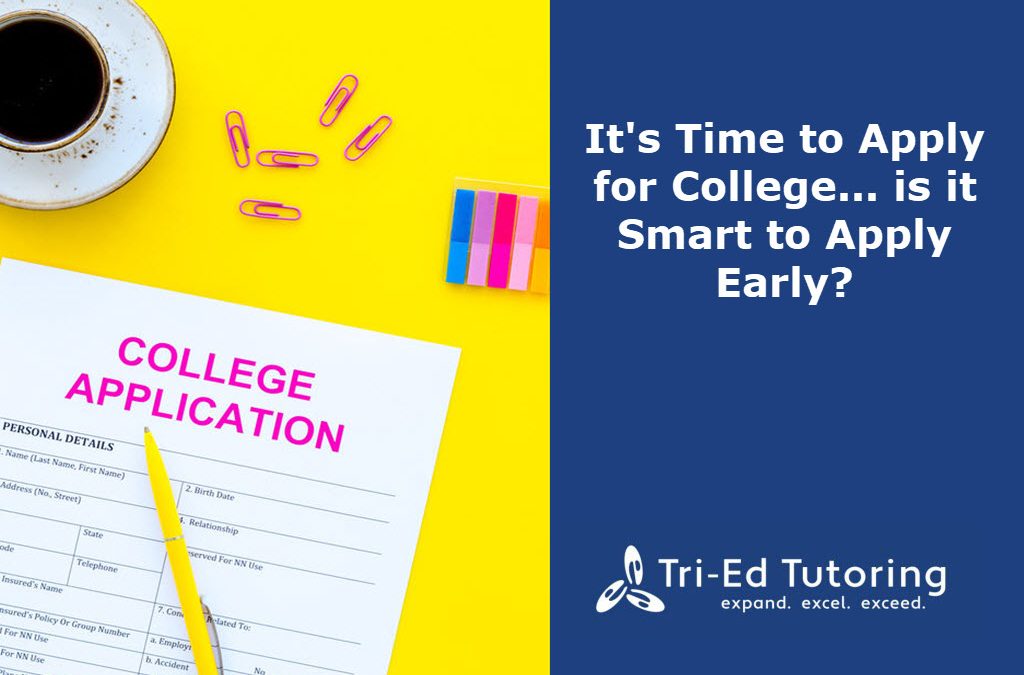 Regular admissions, rolling admissions, early decision, early action… all of these terms refer to college application deadlines. Unfamiliar with the college lingo? Take a few moments to read our previous blog post and learn all about each deadline option. Then, read on to discover the advantages and disadvantages of applying to college early decision or early action.

What’s the difference between early decision and early action?

Students applying early decision or early action typically receive decision letters by January or February, if not earlier. The sooner you know which college you will be attending, the more time you have to consider housing options, meal plans, etc. If you are not accepted early, that school might defer your application to regular admissions, so you still have a chance of acceptance later in the year. This is generally the case for students in the mid-range of average SAT/ACT scores and GPAs for that school. You will most likely have a little time left to apply regular decision to your backup, or safety schools.

Applying to your top school(s) three to four months early takes the pressure off senior year, and you can spend time over the summer before senior year writing your essay and starting the online application. Finally, you can potentially save time and money on other college applications if your top school accepts you early.

Since early decision is binding, you can only apply to one school early decision and, if accepted, you are expected to withdraw any regular decision applications you have submitted. Therefore, you should be absolutely certain which school you want to attend before applying early decision.

Early action does not have this stipulation; however, you still need to have all application materials completed and submitted early, including your SAT/ACT scores, transcript with a current GPA, references, etc. This could be stressful if you would like to improve your test scores and GPA or have not planned ahead.

Applying early decision or early action might impact your financial aid package. Since each school offers different aid packages, you might lose out on money you would have been awarded if you applied to a different school. Unfortunately, you can’t compare aid packages until you have been accepted to a school, so keep this in mind before applying early decision if financial aid is a high priority.

Who should apply early decision or early action?

Applying early decision or early action is ideal if you have researched multiple colleges, weighed all academic, social, and geographic factors, and feel confident in the school you want to attend. If you exceed the average of all admissions requirements, including GPA and test scores, you will have a higher likelihood of early acceptance. A consistent academic record without any declines in grades will give you an advantage when applying early.

Who should not apply early decision or early action?

If you don’t have a specific college in mind or you are not aware of all options available to you after graduation, applying early decision or early action is probably not the best option to pursue. Also, if your GPA is lower than you would like or your test scores don’t reflect your academic ability, it’s smarter to apply regular decision. This will give you time to pull up your grades the first half of senior year or prep for and take one more SAT or ACT late fall. Of course, don’t apply early simply because your friends are; that is not a good enough reason!

Finally, don’t apply early just to get it out of the way. If you don’t think you would be putting your best foot forward applying early, then don’t! Take the time to improve your application and your chance of acceptance.

Does applying early increase my chances of acceptance?

It depends. Applying early shows a school you are very interested and committed to attending that school, which may give you an edge in the eyes of an admissions officer. On the other hand, if the pool of applicants is competitive and highly qualified, it might not matter if your application is one of the first they see. You should apply when you have the strongest application you can submit.

Contact us if you would like help choosing the right colleges for you, completing the college application, or writing your college essay.